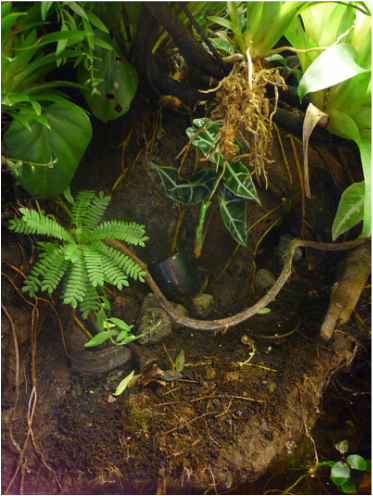 One of the small black jars used for tadpole depositing.
Previous breeding
The breeding of Hyloxalus azureiventri is best done with one pair of frogs. At least, that was explained to me when I was looking for a group of these frogs. At that time, I didn't care for breeding, I just wanted a nice show paludarium. Still, after a while I heard the distinct calling of one of the males and this quickly resulted in a clutch of eggs on a leaf. Ten days later the male was proudly going about with some tadpoles on his back, looking for nice pools of water to drop them off. I caught the male, and put him in a jar with some water to get him to deposit the tadpoles. This worked and I successfully raised the tadpoles in an homemade contraption with separate pools  as was done by other breeders. It, however, took quite some time to feed them and when the tadpoles turned to froglets it was difficult to catch them to put them in a small paludarium. In the end, it all went fine and I found a nice new home for them.
That was the first and last time I spotted a clutch and saw a male with tadpoles. The males were still calling for females but even if there was successful mating I never saw the results of it.

Clutch of Februari 2014
Until Februari 2014 when I noticed a clutch of eggs with a male proudly guarding his offspring. After a couple of days the clutch was gone and the male was hopping around to find some nice pools of water. I really wanted to see if it would be possible to have the tadpoles growing up in the paludarium and I was confident that with all the bromelias in the tank this should not be a problem but after a week he was still carrying all his tadpoles. On the internet I found that apparently, H. azureiventri is quite picky about the size of the pools and that bromelias are not big enough. So, I put in a couple of small, plastic, transparent containers with some water, hoping that he would use them. Seven days later, he still had them on his back and I began to worry. I had read stories of males dying from exhaustion because he couldn't find a pool to his liking and people online were saying that seven days of carrying them around was already a long time. So, I got some small, black plant jars and put these in the paludarium and finally after 2.5 to 3 weeks the male deposited all the tadpoles in the jar.

So, here are two things that go against the current wisdom:

Keeping the tadpoles in one tank
When I noticed that all the tadpoles were in one jar, I decided to take them out and raise them in a separate tank. Previously, I had all tadpoles one by one in small jars, but on the internet it was stated that this species was not cannibalistic so I took the chance to raise them all together in one pool of water. It seemed convenient to have the land area already present, so when the tadpoles grow lungs they can climb out of the water on their own. So, I went and got a big plastic box and filled one area with sphagnum moss which was held in place by big stones and put leaves on top. Some plant cutting from the big paludarium were put in to grow together with a load of springtails. A bit of livermoss was put in the water area. A small heated mat is placed under the box and a small TL light on top. 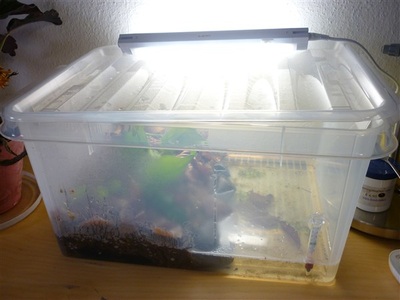 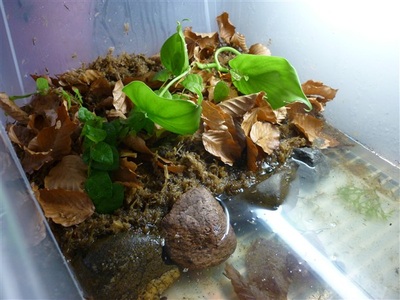 Tadpoles getting bigger
The tadpoles of H. azureiventri are known for growing really big in a short amount of time. Below are some pictures and movies of the tadpoles in various sizes. Unfortunately, the tadpoles become increasingly nervous when I open the tank and hide under the stones. Taking pictures become impossible, and I don't want to stress them too much, so no pictures of tadpoles with hind legs. On March 13th the tadpoles were found in the jar and put in the tank. At the end of April I noticed that the first tadpoles were keeping their head slighly above the water surface and after a couple of days the first were out of the water. 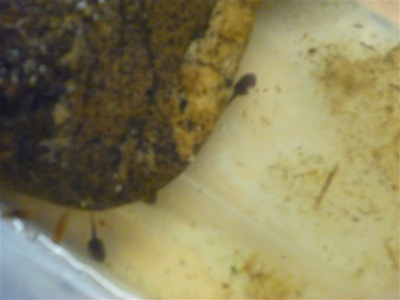 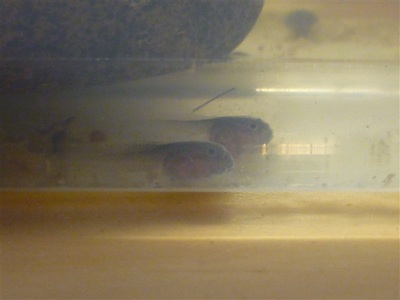 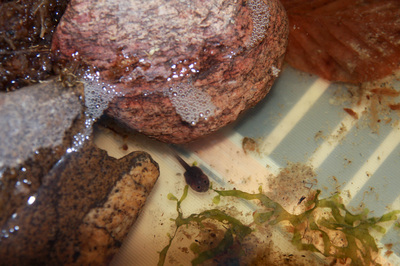 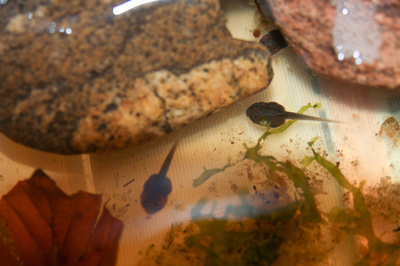 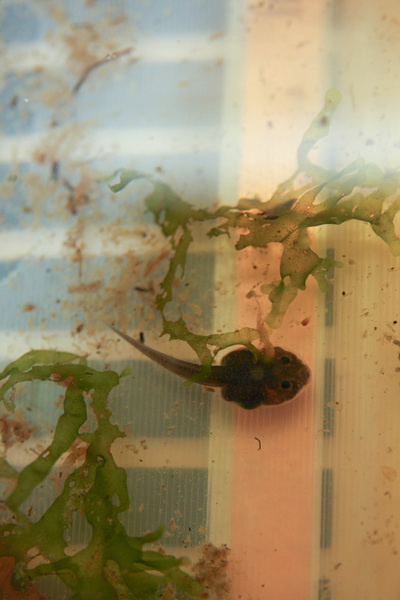 Tadpoles morph into froglets
On April 27th, the first of the tadpoles crawled onto the land. They still have their tail, but this disappears in matter of days. The size of the froglets is considerate when compared to other species, and this makes feeding easy because they can eat small fruit flies almost immediately. And this, together with spring tails and wood lice makes up their diet. In the pictures below the froglets are two weeks old and they grow rapidly.

Ready for their new home
It's beginning of July and the froglets are now 2.5 months old and they are outgrowing their small tank. I don't want to put them in the big paludarium to avoid overcrowding, so I'm now looking for a new home for them. Below some more pictures and videos.
Ongoing
On the 4rd of July  I found two new tadpoles in one of the plant jars and I decided to raise them in the breeding tank which now still houses the older froglets. One week later I found again two tadpoles in a plant jar and they joined the other two in the breeding tank. Apparently, the group of frogs I have now in the big paludarium are on a breeding spree and doing quite well. The story continues!