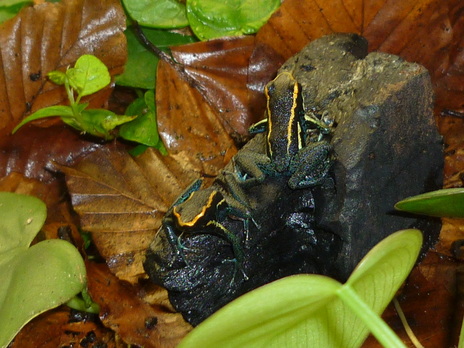 Location & History:
Formerly known as Cryptophyllobates Azureiventris. Northern San Martin, Peru, near Tarapoto. This species ranges from the lowlands up to roughly 1100 meters elevation. This species was exported legally and sustainably in mid-2005 as part of the INIBICO project. Listed as Endangered- Red List.

Descriptions & Behavior:
In the wild this is a shy, terrestrial frog which prefers rocky piles and caves compared to open areas. In the vivarium it is a bold group frog. The Azureiventris is a medium size frog, growing to approximately an inch in length with the females larger than the males. They do not poses the body mass such as the Tinctorius species, and are a rather slim frog.

The males call is loud and bird like, comparable to that of D. Leucomelas.

H. Azureiventris has blue reticulated pattern on its belly. The animals are black with a line that runs from the hind legs, above the eyes to the nose where the lines meet. These stripes range from yellow, green, orange, red and even blue. Their front and hind legs are generally light blue with large black spots.

General Care:
A pair of H. Azureiventris should be kept in a well planted 10 gallon horizontal vivarium. They require temperatures of 75-78 F during the day and can tolerate temperatures in the mid 60’s at night. They are voracious eaters, taking anything from large fruit flies to appropriately sized crickets.

There are no different color morphs within this species, color and pattern can vary greatly even with same color parents.
They prefer high humidity, around 90% for successful breeding.

Breeding and Tadpole Care:
Sexual maturity is reached in 3-4 months for males, 7-8 months for females. Keeping a pair together is best for breeding as there is no competition among males and no egg eating between females. They are prolific breeders, laying eggs under cocoa huts as well as on leaves. The female will normally lay between 10 and 15 eggs which will hatch around 10 days. The eggs have a “milky” appearance, this make the eggs look as if they are about to mold; however, the eggs are perfectly healthy. The male will guard his clutch and can transport the tads for upwards of 5 days. Tads can be raised communally and will morph into froglets in 45 days. They produce male heavy clutches. Tads should be “incubated” at cooler temperatures around 64 degrees Fahrenheit as temperature id hypothesized to have an influence on the sex ratio of tads. Tadpoles can be raised communally on a diet of tadpole bites and high quality fish food.

Conservation:
Populations of H. Azureiventris are not present in any protected areas and there is a need to encourage the protection of remaining lowland habitat as well as establish a conservation management plan for the trade of this species.
It is listed on CITES Appendix II (as Cryptophyllobates azureiventris).